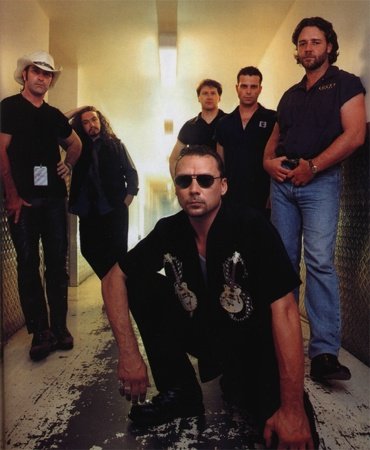 In the 1980s, Crowe and friend Billy Dean Cochran formed a band, Roman Antix, which later evolved into the Australian rock band 30 Odd Foot of Grunts (abbreviated to TOFOG). Crowe performed lead vocals and guitar for the band, which formed in 1992. The band released The Photograph Kills EP in 1995, as well as three full-length records, Gaslight (1998), Bastard Life or Clarity (2001) and Other Ways of Speaking (2003). In 2000, TOFOG performed shows in London, Los Angeles and the now famous run of shows at Stubbs in Austin, Texas which became a live DVD that was released in 2001, called Texas. In 2001, the band came to the US for major press, radio and TV appearances for the Bastard Life or Clarity release and returned to Stubbs in Austin, Texas to kick off a sold out US tour with dates in Austin, Boulder, Chicago, Portland, San Francisco, Los Angeles, Philadelphia, New York City and the last show at the famous Stone Pony in Asbury Park, New Jersey.

Crowe appeared as the tobacco firm whistle blower Jeffrey Wigand in the 1999 film The Insider, for which he received five awards as best actor and seven nominations in the same category. In 2001, Crowe’s portrayal of mathematician and Nobel Prize winner John F. Nash in the biopic A Beautiful Mind brought him numerous awards, including a BAFTA Award for Best Actor in a Leading Role, a Golden Globe Award for Best Actor in a Motion Picture Drama and a Screen Actors Guild Award for Outstanding Performance by a Male Actor in a Leading Role.