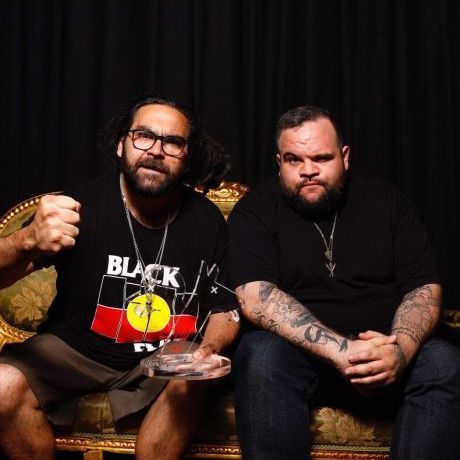 A.B. Original is an Australian hip hop duo made up of Briggs and Trials. A.B. Original stands for Always Black, Original. Both members are Indigenous Australians; Briggs is a Yorta Yorta man and Trials is Ngarrindjeri. Their music is overtly political and has been described as ‘angry, polemical, brutally frank and meant to inspire a response, good or bad’.

A.B. Original’s single ‘January 26’ (featuring Dan Sultan), released in August 2016, which comments on the use of that date for Australia Day. This was followed up by an album entitled Reclaim Australia in November. The provocatively titled album features many guests including Thelma Plum, G. Yunupingu and Archie Roach. At the APRA Music Awards of 2018 the duo won Songwriter of the Year.

We See You’re a Fan of A.B. Original