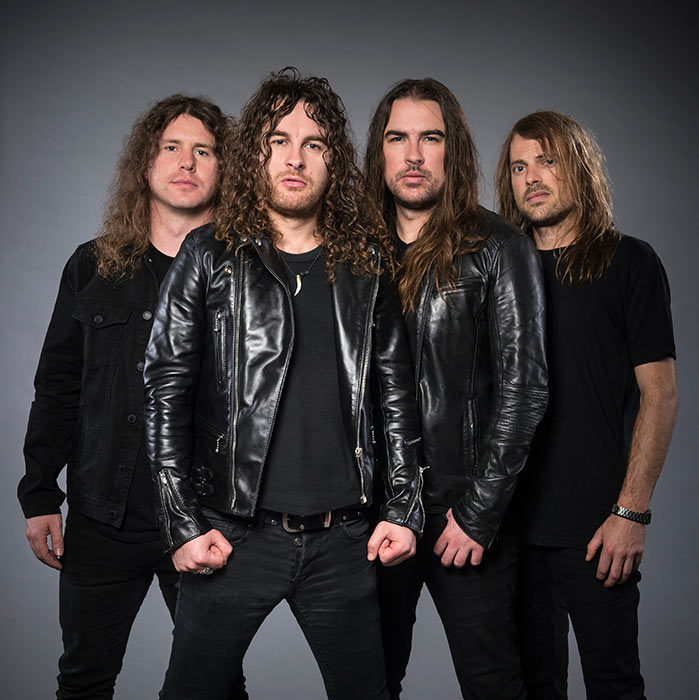 Airbourne is an Australian hard rock band formed in Warrnambool in 2003. Mainstay members are Joel O’Keeffe on lead vocals and lead guitar, and his brother Ryan O’Keeffe on drums. They were later joined by Justin Street on bass guitar and backing vocals. David Roads (on rhythm guitar and backing vocals) was also a mainstay member until leaving the band in April 2017 – Harri Harrison was announced as his replacement. Their debut album, Runnin’ Wild, was released in June 2007 and peaked in the top 30 on the ARIA Albums Chart. It appeared on the United Kingdom Albums Chart and United States Billboard 200. By August 2013, it was certified with Silver award by BPI. Their second album, No Guts. No Glory. was issued in March 2010 and reached the top 20 on the ARIA Chart, top 40 in the UK and also appeared on the Billboard 200. Their third studio album Black Dog Barking was released on 21 May 2013. In October of 2016, Airbourne released their fourth album, titled Breakin’ Outta Hell

Airbourne formed as a hard rock band in late 2003 in the Victorian country town of Warrnambool by Joel O’Keeffe (born c. 1985) and his younger brother Ryan (born c. 1986). Joel had played guitar since the age of 11 and Ryan got his first drum kit four years later also at the age of 11. Joel met David Roads (born c. 1983) when the two worked at the Hotel Warrnambool. The pair brought their guitars to work and, after their shifts, jammed on song ideas; Roads was asked to join the O’Keeffe brothers on rhythm guitar for rehearsals at their house. By late 2003, Adam Jacobson had joined on bass guitar, the group was named Airbourne and played regular gigs at the local Criterion Hotel.

We See You’re a Fan of Airbourne