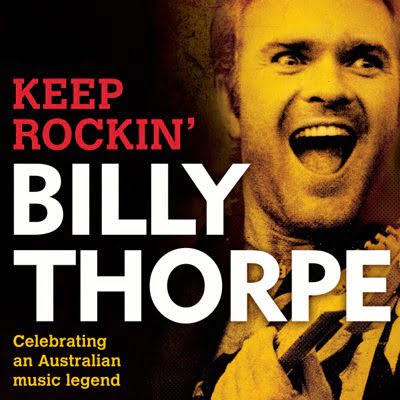 William Richard Thorpe,AM (29 March 1946 – 28 February 2007) known as Billy Thorpe, was an English-born Australian pop / rock singer-songwriter, producer,and musician. As lead singer of his band Billy Thorpe & the Aztecs, he had success in the 1960s with ‘Blue Day’, ‘Poison Ivy’, ‘Over the Rainbow’, ‘Sick and Tired’, ‘Baby, Hold Me Close’ and ‘Mashed Potato’; and in the 1970s with ‘Most People I Know Think That I’m Crazy’. Featuring in concerts at Sunbury Pop Festivals and Myer Music Bowl in the early 1970s, the Aztecs also developed the pub rock scene and were one of the loudest groups in Australia.

Thorpe also performed as a solo artist; he relocated to the United States from 1976 to 1996 where he released the space operaChildren of the Sun, which peaked in the top 40 of the Billboard Pop Album chart in 1979. He worked with ex-Aztec Tony Barber to form a soft toy company in 1987 and co-wrote stories for The Puggle Tales and Tales from the Lost Forests. Thorpe also worked as a producer and composed music scores for TV series including War of the Worlds, Star Trek: The Next Generation, Columbo, Eight Is Enough and Hard Time on Planet Earth.

We See You’re a Fan of Billy Thorpe