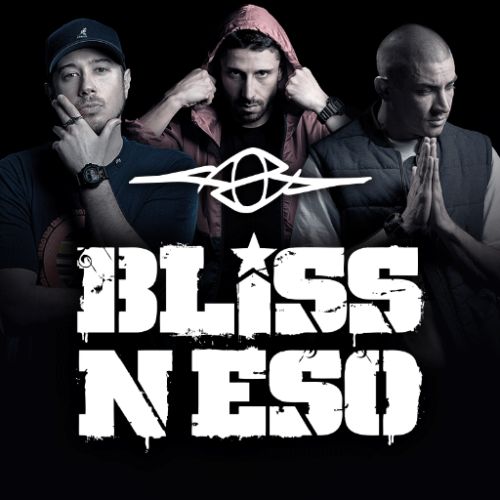 Bliss n Eso are an Australian hip hop trio based in Sydney, and were originally known as Bliss n’ Esoterik for their debut EP The Arrival. Bliss n Eso are currently signed to Melbourne record label Illusive Sounds, and are managed and booked by label co-founders Adam Jankie and Matt Gudinski. Bliss n Eso have released six studio albums which include three number 1 debuts on the ARIA Charts. They have also won two ARIA Award for Best Urban Release for their 2008 album Flying Colours and for Best Music Video for their 2017 single ‘Moments’. Eso, under the alias Esoterik, released an album entitled ‘My Astral Plane’ in May 2018.

The trio consists of American MC Bliss (Jonathan Notley), Australian MC Eso (Max MacKinnon), and DJ Izm (Tarik Ejjamai) who is Arab, of Moroccan heritage. The three have been friends (and have rapped together) since they were in high school. Notley moved to Australia in 1992 when he was thirteen and met MacKinnon while attending Glenaeon Rudolf Steiner School in Sydney.

We See You’re a Fan of Bliss n Eso