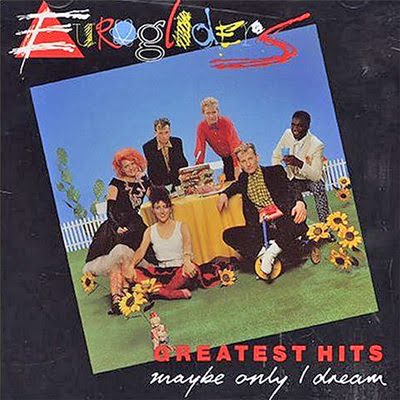 Eurogliders are a band formed in 1980 in Perth, Western Australia, which included Grace Knight on vocals, Bernie Lynch on guitar and vocals, and Amanda Vincent on keyboards. In 1984, Eurogliders released an Australian top ten album, This Island, which spawned their No. 2 hit single, ‘Heaven (Must Be There)’. ‘Heaven’ also peaked at No. 21 on the United States BillboardMainstream Rock charts and appeared on the Hot 100. Another Australian top ten album, Absolutely, followed in 1985, which provided two further local top ten singles, ‘We Will Together’, and ‘Can’t Wait to See You’. They disbanded in 1989, with Knight having a successful career as a jazz singer. Australian rock music historian Ian McFarlane described Eurogliders as ‘the accessible face of post-punknew wave music. The band’s sophisticated brand of pop was traditional in its structure, but displayed the decidedly ‘modern veneer’ (hip clothes, heavy use of synthesiser)’. The band reformed in 2005 releasing a new album followed ten years later by their sixth album.

Guitarist and singer Bernie Lynch (as Rip Torn) fronted a new wave band, The Stockings, in Perth, Western Australia in the late 1970s. He left in early 1980 to form Living Single, with keyboard player Amanda Vincent. Together, they recruited Crispin Akerman on guitar, Don Meharry on bass guitar and Guy Slingerland on drums through a series of advertisements. The following year, Grace Knight – Lynch’s future domestic partner – joined as lead vocalist. By the end of 1981, drummer John Bennetts replaced Slingerland and the band changed their name to Eurogliders. They were signed by manager, Brian Peacock, to their first recording and publishing contracts with Polygram. They recruited Melbourne bass player Geoff Rosenberg to replace Meharry. In 1982, Eurogliders travelled to Manila, capital of the Philippines, to record their first album, Pink Suit Blue Day, produced by Englishman Lem Lubin, which did not peak into the top 50 of the Australian Kent Music Report albums chart. From Manila, they relocated to Sydney to release their first single in June, ‘Without You’, which peaked into the top 40 on the Kent Music Report singles chart.

We See You’re a Fan of Eurogliders