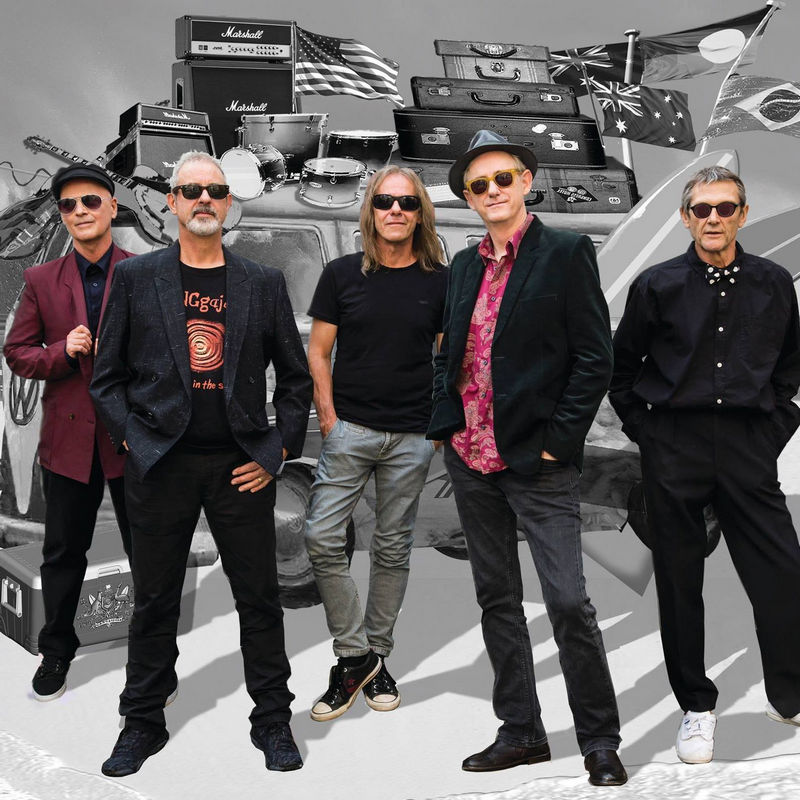 Ganggajang (styled as GANGgajang) are an Australian pop rock band which formed in 1984. Three of the founders are frontman Mark ‘Cal’ Callaghan (ex-Riptides) on guitar and lead vocals, Chris Bailey on bass guitar and Graham ‘Buzz’ Bidstrup on drums (both ex-The Angels). They were soon joined by Geoffrey Stapleton (ex-Aliens] on keyboards, guitar and vocals, and Robbie James on lead guitar. Their most popular song, ‘Sounds of Then’, a.k.a. ‘This Is Australia’, was issued in December 1985 and peaked in the top 40 on the Australian Kent Music Report Singles Chart. It became familiar to Australians ten years later when it was used on TV in a Coca-Cola ad and then for the 1996 Nine Network station ID promotion. Their highest selling album was GANGgajang (styled as GANGgajang), which was released in November 1985. They have issued three other studio albums, Gang Again (as gangAGAIN) (1987), Lingo (1994) and Oceans and Deserts (2002). On 4 April 2013, Chris Bailey died of throat cancer, aged 62.

Gang Gajang (styled as GANGgajang) founders, Chris Bailey, Graham ‘Buzz’ Bidstrup, and Mark ‘Cal’ Callaghan had previously been members of various bands. Bailey, on bass guitar and vocals, had been a member of Adelaide groups, Tattered Sole and then Red Angel Panic, before forming progressive rockersHeadband in 1971 with Peter Beagley (later known as Peter Head) on piano and vocals. In 1974 Bailey joined Mount Lofty Rangers alongside Bon Scott (later in AC/DC) on vocals and Head. In March 1975, Bailey released a solo single, ‘Sunday Too Far Away’. Bidstrup had been the drummer in Fahrenheit 451 in 1967, then Red Angel Panic (with Bailey) and was in a succession of groups into the mid-1970s. In August 1976, Bidstrup joined Adelaide hard rockers, The Angels alongside lead vocalist Doc Neeson. In January 1977, Bailey also joined The Angels. Callaghan had formed The Grudge in 1977 in Brisbane with fellow students from the Architecture Department of the University of Queensland. The Grudge underwent a succession of names (The Neon Steal, The Numbers) to become The Riptides in 1979 with Callaghan on lead vocals and lead guitar. In March 1981 Bidstrup left The Angels and Bailey left in April 1982. In 1982 Bidstrup joined The Party Boys in Sydney. In January 1983, Riptides had disbanded and Callaghan was in Sydney. Bidstrup and Callaghan worked together on ‘Gimme Some Loving’ and recorded it as a demo in 1983.

We See You’re a Fan of GANGgajang