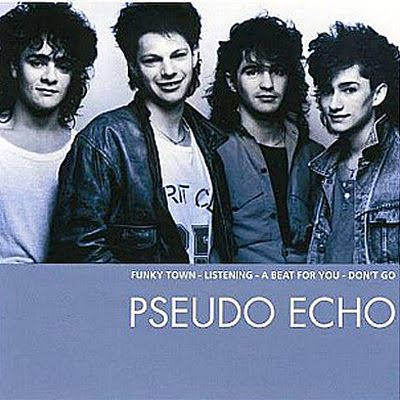 Pseudo Echo are an Australian new wave band that formed in 1982 in Melbourne. The original line-up consisted of Brian Canham (vocals, guitars and keyboards), Pierre Gigliotti (as Pierre Pierre) (bass guitar, keyboards), Tony Lugton (guitars and keyboards) and Anthony Argiro (drums). A later line-up included James Leigh (keyboards) and his brother, Vince Leigh (drums). In the 1980s, Pseudo Echo had Australian top 20 hits with ‘Listening’, ‘A Beat for You’, ‘Don’t Go’, ‘Love an Adventure’, ‘Living in a Dream’ and their cover of ‘Funky Town’ (from Lipps Inc.), which peaked at No. 1 in 1986. In 1987, it reached No. 1 in Canada and New Zealand, No. 6 in United States and No. 8 in United Kingdom.

They released their debut album, Autumnal Park in 1984 which peaked at No. 11 on the Australian Kent Music Report. Love an Adventure followed in 1985 and reached No. 14. Their third album, Race (1988) peaked at No. 18 and in 1990 the group disbanded. They reformed in 1998 and issued Teleporter in 2000. Australian rock music historian Ian McFarlane stated they ‘combined flash clothes, blow-wave hairstyles, youthful exuberance and accessible synth-pop to arrive at a winning combination … and found a ready-made audience among teenagers who fawned on the band’s every move’.

We See You’re a Fan of Pseudo Echo