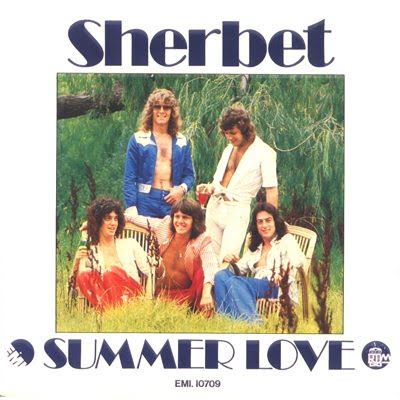 Sherbet (aka Highway or The Sherbs) was one of the most prominent and successful Australian rock bands of the 1970s. The ‘classic line-up’ of Daryl Braithwaite on vocals, Tony Mitchell on bass guitar, Garth Porter on keyboards, Alan Sandow on drums, and Clive Shakespeare on guitar provided their teen-orientated pop style. In 1976 Shakespeare left and was soon replaced by Harvey James. Sherbet’s biggest singles were ‘Summer Love’ (1975) and ‘Howzat’ (1976), both reaching number one in Australia. ‘Howzat’ was also a top 5 hit in the United Kingdom. The band was less successful in the United States, where ‘Howzat’ peaked at No. 61. As The Sherbs they also reached No. 61 in 1981 with ‘I Have the Skill’. The group disbanded in 1984. Subsequent re-unions have occurred since 1998.

According to rock music historian, Ian McFarlane, ‘alongside Skyhooks, Sherbet was the most successful Australian pop band of the 1970s. With a run of 20 consecutive hit singles to its credit, and 17 albums that yielded ten platinum and 40 gold disc awards, Sherbet was the first domestic act to sell a million dollars’ worth of records in Australia’. In 1990 Sherbet were inducted into the ARIA Hall of Fame alongside classical composer and pianist, Percy Grainger. On 15 January 2011 Harvey James died of lung cancer. On 15 February 2012 Clive Shakespeare died of prostate cancer.

We See You’re a Fan of Sherbet