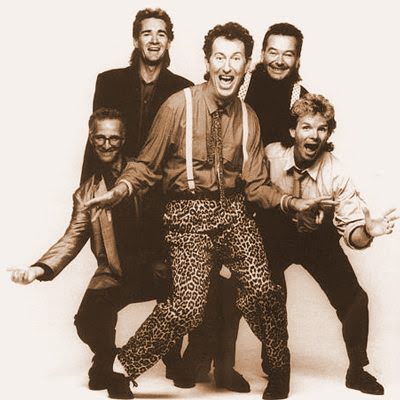 The Delltones are an Australian rock ‘n’ roll band, formed in 1958. They started out as a vocal harmony group with members: Brian Perkins, Noel Widerberg, Ian ‘Peewee’ Wilson, and Warren Lucas. In June 1962 lead vocalist Noel Widerberg died in a motor vehicle accident in Brighton-le-Sands in Sydney, and three weeks later the group’s single ‘Get A Little Dirt On Your Hands’ entered the Australian charts, reaching the top five. . Noel Widerberg’s position was filled by Col Loughnan.

The Delltones have been performing for Australian audiences for over five decades; their most successful recording years were in the 1960s. Wilson is the only current member from the original line-up. In the mid-1980s, he transformed the group from a vocal quartet to a five-piece vocal band. This, along with other stylistic changes, led to the band’s resurgence and the chart topping, rock ‘n roll revival album, Bop Til Ya Drop. The Delltones remain one of the most consistent live entertainers in Australia.

We See You’re a Fan of The Delltones