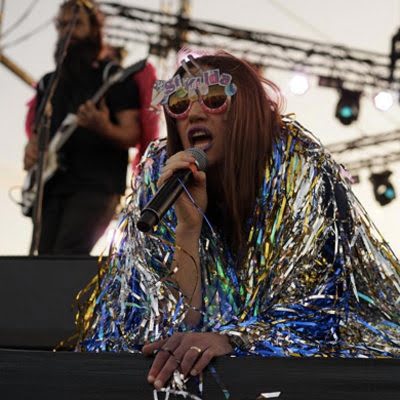 The Grates are a three-piece indie rock band formed in Brisbane in 2002. The original line-up was Patience Hodgson on lead vocals, John Patterson on guitars and backing vocals and Alana Skyring on drums. They were brought to national attention when a demo of their single, ‘Trampoline’ (2004), received airplay on radio station, Triple J. Their first two albums, Gravity Won’t Get You High (2006) and Teeth Lost, Hearts Won (2008), both reached the ARIA Albums Chart top 10. Skyring left in 2010 to become a chef and was replaced on drums by Ben Marshall for the third album, Secret Rituals (2011), which reached No. 11. The Grates’ fourth album, Dream Team (2014), was recorded with new drummer, Richard Daniell. The band provide energetic and often sold out live shows. Since May 2012 Hodgson and Patterson are also proprietors of Southside Tea Room, a cafe and bar, in Morningside; the couple also married in November that year.

The Grates were formed in 2002 in Brisbane by Patience Hodgson on lead vocals, John Patterson on guitars and backing vocals and Alana Skyring on drums. Patterson and Skyring had attended Alexandra Hills State High School. In 1999, they met Cleveland State High School student, Hodgson, in year 12 at a drama class, which all three attended at the local TAFE to avoid physical education classes.

We See You’re a Fan of The Grates