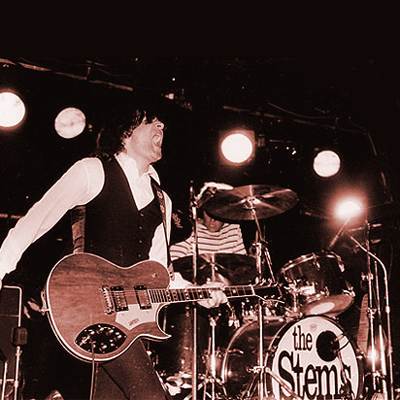 The Stems formed in late 1983 when vocalist/guitarist Dom Mariani, formerly in The Go-Starts, was introduced to Richard Lane. Lane had seen Mariani in the final few gigs of The Go-Starts and had asked him for guitar lessons which developed into jams, and then writing songs. Finally, the decision was made to form The Stems. A friend, Gary Chambers, was recruited to join on drums, and bass guitarist John Shuttleworth was poached from the Pink Armadillos. In March 1984, the band had their debut gig at the Old Civic Theater in Perth, which was in support of The Saints and The Triffids. Their sound was influenced by 1960s garage acts ranging from the Electric Prunes, The Standells, and The Chocolate Watch Band to The Easybeats. A local Saturday night residency at the Wizbah venue saw throwback covers with a growing list of original songs which developed a cult following for the band. Shuttleworth decided to leave, so a final gig for the band was arranged which drew a large crowd. The success of this gig and freshly written songs caused the band to recruit a new bass player, school friend Julian Matthews.

We See You’re a Fan of The Stems