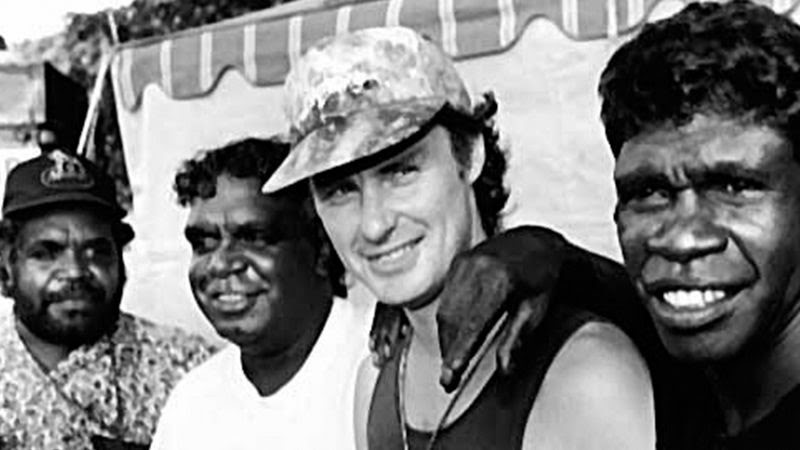 Warumpi Band (/ˈwʌrəmpi/) were an Australian country and Aboriginal rock group which formed in the outback settlement of Papunya, Northern Territory in 1980. The original line-up was George Burarrwanga on vocals and didgeridoo, Gordon Butcher on drums, his brother Sammy Butcher on guitar and bass guitar, and Neil Murray on rhythm guitar and backing vocals. Their key singles are ‘Jailanguru Pakarnu’ (1983), ‘Blackfella/Whitefella’ (1985), ‘Sit Down Money’ (1986), ‘My Island Home’ (1987) and ‘No Fear’ (1987). The group released three albums, Big Name, No Blankets (1985), Go Bush! (1987) and Too Much Humbug (1996). From late 1987 to mid-1995 the group rarely performed as Murray focused on his solo career. In early 1995, Christine Anu (former backing singer in Murray’s touring group, The Rainmakers), issued a cover version of ‘My Island Home’. Warumpi Band regrouped before disbanding in 2000. Burarrwanga died on 10 June 2007 of lung cancer.

The Warumpi Band were formed in 1980 in Papunya – an outback settlement about 240 kilometres (150 mi) north-west of Alice Springs in the Northern Territory – as a country and Aboriginal rock group.Neil Murray was a Victorian-born schoolteacher and labourer who was working in the region. He met local brothers Gordon Butcher Tjapanangka and Sammy Butcher Tjapanangka of the Luritja people; and were joined by Sammy’s brother-in-law George Rrurrambu Burarrwanga (aka George Djilangya), visiting from Elcho Islands Yolngu people. Murray provided rhythm guitar and backing vocals, Gordon was on drums, Sammy on guitar and bass guitar, and Burarrwanga on vocals and didgeridoo. ‘Warumpi’ derives from the Luritja word for a ‘honey-ant dreaming site’, which lies near Papunya. Over the years, many different people played in the band at various times. The only consistent elements were Murray and Burarrwanga, with Sammy Butcher generally being available when band commitments did not take him too far from home for long.

We See You’re a Fan of Warumpi Band