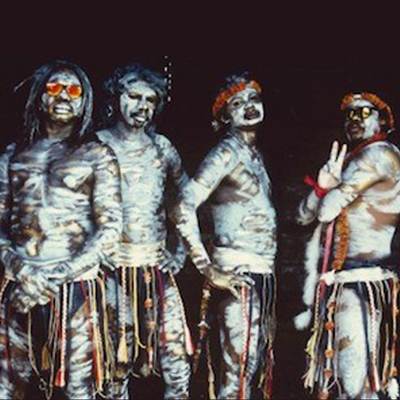 The band combined aspects of both musical cultures. Their sound varied from traditional Aboriginal songs to modern pop and rock songs, where they blended the typical instruments associated with pop/rock bands, such as guitars and drums, with the traditional yidaki and bilma. They adapted traditional Yolngu dance performances to accompany their music. More broadly, they promoted mutual respect and understanding in the coming together of different cultures. Yothu Yindi’s most widely known song, ‘Treaty’, peaked at No. 11 on the ARIA singles charts in 1991 and the related album Tribal Voice peaked at No. 4 on the ARIA albums charts. The second single from Tribal Voice was ‘Djäpana (Sunset Dreaming)’, which peaked at No. 13 in 1992. Their debut album was Homeland Movement in 1988 on Mushroom Records; other albums are Tribal Voice in 1991, Freedom in 1993, Birrkuta – Wild Honey in 1996, One Blood in 1998 and Garma in 2000.

We See You’re a Fan of Yothu Yindi